Ingredients to avoid in dog food

Eating a healthy diet is one of the best things people can do to prevent illness, age comfortably, and feel good in general. For some reason, that philosophy doesn’t always translate to our dogs. Within the past century, dogs went from eating real food off tables to “dog food” which may not offer that much nutritional value depending on the brand.

That isn’t to say that there aren’t good dog kibbles, wet food, raw, and more out there. However, there are a lot of brands that use low quality ingredients that may be contributing to a number of issues for your dog. This blog isn’t meant to put any particular brands on blast. Rather, this article will list numerous ingredients you want to avoid when it comes to feeding your dog and hopefully that will help you make an educated decision on foods to choose for your pet. After all, you are what you eat – and so are they. 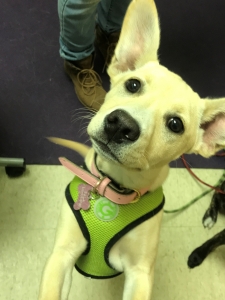 There is a lot of controversy that surrounds grain free diets currently. Most of it is the result of attention grabbing headlines over a correlation study filled with bias. In and of itself, a little wheat probably isn’t too harmful to dogs. The bigger issue are dog foods where the majority of ingredients are sourced from wheat.

When you read (this article lists how to read the ingredient panel) an ingredient panel, the first ingredient listed is the major ingredient in the food by weight. The second is the second most by weight, etc. In an ideal world, the first wheat ingredient would be listed a little further down the list (maybe the 4th or 5th listed) rather than being a major ingredient. Wheat is believed to play a roll in allergies, among other things. Therefore, just like in humans, it is ideal to limit how many grains we are eating.

Corn is a cheap filler used in many dog foods. It can be difficult for a dog to digest, may contribute to allergies, and has a higher glycemic index than most other foods in making dog food. A higher glycemic index contributes to the potential of developing type 2 diabetes, and all the secondary issues related to the chronic disease. In addition, it doesn’t appear to have any major nutritional value. A little corn to help as a filler in kibble, etc. is probably okay. However, we want to avoid it as a major ingredient if possible.

There are a few issues with soy. For one, the majority produced in the United States are genetically modified. They are covered in pesticides, such as Round Up, which is believed to promote cancer development, etc. It’s also believed to affect the digestion of protein. Soybeans contain large quantities of natural toxins that block the enzymes needed to digest protein. This can lead to gastric distress which can affect nutrient absorption. This contributes to amino acid deficiencies that affect our dog’s health.

Why are they used in dog food then? They help add bulk to food and are a cheaper source than meat for protein. Again, we don’t want to see this as a major ingredient in a food panel.

White flour has minimal nutritional value. It is what remains after grain is stripped of the nutrient dense bran, germ, etc. In addition, it contains a high glycemic index. This contributes to conditions such as type 2 diabetes.

Corn syrup has a high glycemic index. Getting regularly fed a food which corn syrup will contribute to obesity and type 2 diabetes. 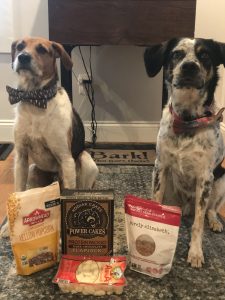 Byproduct are all the ingredients remaining from an animal carcass after the meat and bones are removed. This can include hair, beaks, etc. with minimal nutrient value. These ingredients can be simmered like a stew then eventually ground and used in dog food. According to some references, there may not be much nutritional difference between named byproducts such as chicken byproduct, beef byproduct, etc. and their non byproduct counterpart. However, it is difficult to know what exactly is in it.

You should always avoid a non specific source for byproduct. If you see meat or animal byproduct, the source can be roadkill, dead on arrival animals, diseased livestock and more. These are not good sources of nutrients for our pets. As a matter of fact, it’s best to avoid any food where the ingredient in general is listed as meat and not a specific source such as chicken, etc.

Why are byproducts used then? It is cheaper for the manufacturer to produce dog food. If you see byproduct in an ingredient label it may be a clue that they are using cheaper ingredients in general. Therefore, it’s probably not worth spending top dollar on foods that contain these ingredients. It may even be best to avoid the ingredients in general as you may not know exactly what you are getting.

Food dyes have been shown to contribute to allergic type reactions, behavior issues, and cancer in humans. With that understanding, it may very well lead to similar issues in dogs. The most notorious offenders are Yellow 5, Red 40, Blue 2, and Yellow 6. The dye is probably more to catch the eye of the human purchasing food than attracting the dog. So, it’s best to avoid them if at all possible.

These are fat preservatives found in dog food. They have been linked to cancer in humans and animals. However, the FDA allows them as long as they are in low doses. However, dogs fed this food get a cumulative exposure so it may be difficult to discern if the “low dose” is creating an issue. Therefore, it’s best to avoid this ingredient. Rather, look for natural preservatives such as Vitamin C and Vitamin E.

Xylitol is an artificial sweetener commonly found in gum and toothpaste. It seems to be making its way into dog treats and food recently. It’s not particularly harmful to humans, but it is for dogs. If you see this ingredient, it is best to choose another food option.

If you see the terms animal or rendered fat, it’s probably a low quality ingredient. Similar to the byproduct section above, we want a specific source of fat listed such as chicken, etc. If not, it’s possible the source is a diseased animal, road kill, or other. This is particularly problematic as fat stores toxins in humans and animals. Therefore, we need to know the source the fat originates from so that we aren’t feeding our pets something that could create numerous health issues.

Powdered cellulose is actually saw dust. It is filled with an enormous amount of insoluble fiber. This can create issues with digestion and absorption of nutrients such as protein and important minerals. Small prey animals have no physiologic requirement for the plant fibers such as cellulose used in many dog foods. A little fiber certainly helps, but the amounts found in many foods are probably more problematic than helpful.

There are probably more ingredients out there worth avoiding, but this is a good starter list to help you when making dog food decisions. Many chronic issues and diseases can be attributed to what dogs eat, just like in people. Therefore, it’s best to feed the best quality food that fits your budget. When shopping, keep your eye out for these ingredients to avoid in dog food. Your pet will be thankful you did.

Interested in learning more about pet nutrition topics? Visit our blog for information on other topics!